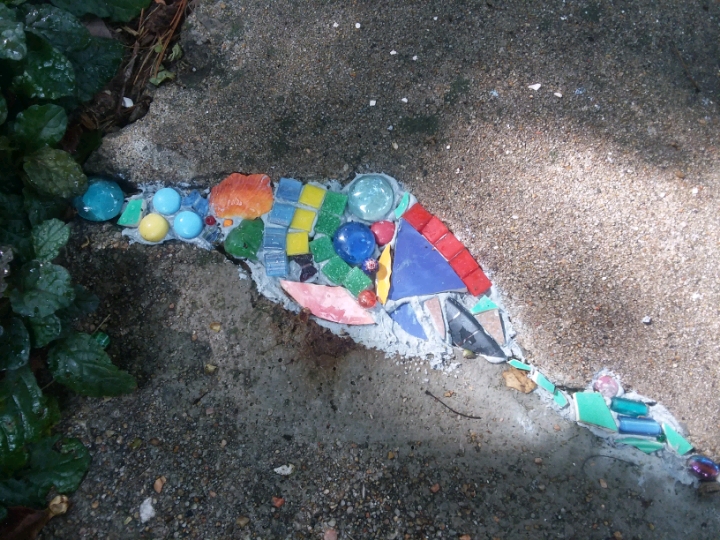 I've been working on the sidewalk cracks again, early in the morning when if there were roses, there would be dew on them. Have to get out there before it gets hot as we are still encapsulated in the endless summer of 2018. Talk about slow going. This project may be going on for years. I can only work on it for a limited time because my back and neck get jacked up. The first time I went back out there I stayed too long and suffered for it later. Today, I made a plan that I knew would be quick and once that was completed came back in. Tried for some pictures, but it is not easily photographed by my crappy phone. New cheap glass beads are winging their way to me as I can't bring myself to use gemstones out there and my supply of glass is small. Although I would prefer to use broken saucers and such, most of the cracks are shallow and beads do a better job. Using up the last of the tesserae left over from the chimney mosaic which is good, and finding that glass globs from the dollar store look great.

Just back from the local hardware store where I bought a number of small pots and saucers in which will go small succulents that have proliferated during the summer. Hoping for a rainy day tomorrow so it will be cool enough to pot them up.

Have an eye doctor's appointment in the morning for the visual field test. The techs tells me that most people really hate the test. It measures the acuity of your lateral field of vision, important when you have glaucoma like me. I don't mind the test, simply pretend it's a video game and relax with it.

Thursday another doctor's appointment to have some spots frozen off my face. Please don't let it hurt a lot :)

Labor Day turned out to be a non-holiday. All of the kids were doing other things. Erin was here briefly with some friends who had come to pick the garden. Ever so grateful to give them the produce so that it didn't go to waste. I have so much in the fridge I can't fit another thing in there. The tomatoes look like they are on their "last legs" riddled with blight again, but now and again we get a nice one. The romas are looking better than the heirlooms though they don't taste as good.

Currently reading a Dutch mystery, "A Corpse at Midnight," which is quite odd, but interesting enough that I will finish it. Watched the first season of "The Bletchley Circle" on Netflix and it kept me awake which is really saying something.

I've been waking up at 4 which I don't care for much. I'm going to start getting out of bed as soon as I wake up rather than lie there and listen to the demons in my head.

We've had a lovely bunch of rains and everything outside looks like Spring. Hoping for a nice long cool Fall to make up for the Spring we didn't have earlier. That's it from Shady Grove Farm, time to practice ukulele.