Sundays are nearly always too busy to post in LJ. Family dinner with varying numbers of hungry people. I fried catfish for what seemed like forever. But, admittedly it was delicious. We accompanied the fish with smashed potatoes, kale salad and cornbread. Everyone seemed quite pleased and ate heartily except granddaughter, Lainey, who was having stomach issues. Talked to her mother and she was feeling better this morning, though not excited at having to go back to school. We were all glad that she did not have the dreaded stomach virus that is "going around" in the schools.

I'm still trying to get the first row of crochet to come out correctly. Somehow three times, my count has been off. GRRR.. I don't know how many more times I will rip it out before I abandon the whole damned project. Apparently I still require lessons in Patience.

Today has been quiet. The husband and I cleaned out a couple of cabinets in the laundry room. UGH! It has been centuries since that had been done. I may not live long enough to see it happen again.

And now for the two word prompts.

12. You receive exciting news, who do you tell first? My decision would rely heavily on the content of the news. Most often daughter no. 2 is the first recipient of all good news because she is most likely to respond cheerfully.

13. What qualities do you like least in others? Dishonesty, can't stand liars, followed shortly by lack of compassion. I don't care for gossips, nor loud rude people either. I could go on as there are few qualities I do admire in most humans, which is why I spend most of my time alone. Not to say that I am some shining example of how a human should behave, as I can certainly be not very kind at times. But, I have found that I can't get away from myself, but can escape the formerly mentioned "most humans." 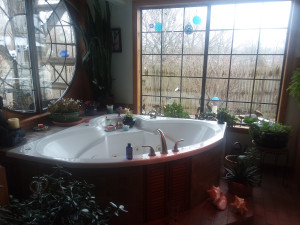 And, now, after crawling around on the floor cleaning out the bottom cabinet, I think a long hot bath is in order. Eye doc appointment tomorrow, so it is best to be clean and tidy if possible.
Collapse