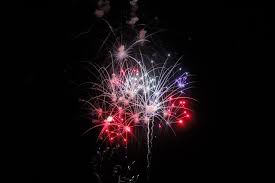 This post is a bit dated. I wrote it on the 4th, but kept it private and neglected to go back and edit = post delayed.

Got home from Denver this morning about 10 a.m. spent the night at the Elms and when at 6:30  we were all awake. Erin said, "Hey! Why don't we just go on home and we did. Didn't even let the husband know that I was going to show up which didn't give him time to get rid of the dancing girls but oh well. Didn't stop for breakfast.

It was raining when we got home about 10 a.m., and it was a moist Fourth of July night. The neighbors who just moved in are having a great display. I watched that for a while then I attempted to drive around the square block on which I occupy one side but, there was an insane amount of traffic out there accompanied by a dense blanket of smoke. So I drove to town- which seemed to be a relative place of safety - and circled back to return to the farm from another road.

The realization sunk in just how seldom I drive around at night these days. I had a hard time seeing in the dark and smoke. For a moment I thought I was lost on a road I've traveled thousands of times. I suppose that at any time I could have just stopped like all these other people in the middle of the road and watched the fireworks. But, I felt trapped. I nicely (though I didn't feel nice) explained to a man that I needed to get home and he let me through. I arrived home to the continued booming of fireworks. But the dog at least had finally gone to lie down. She does not like loud noises. So I got a little dose of fireworks, but not much on this Fourth of July. It was enough.

Feeling the effects in my back from being in a car for 10 hours. And, winding down from what turned out to be good trip to Denver. I went off to bed and forgot about this entry until today.

Having an challenging time recovering from the travel stress, but getting a little better every day.

Oh...and the raccoon count has risen to 8. All out of attic, moved trap to near compost pile.