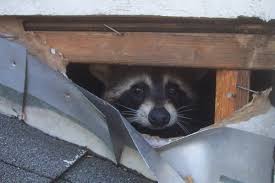 I noticed a lot of thumping and scratching coming from the attic above my bathroom. Consulted with the husband and we were thinking squirrels. He bought a live trap and set it up under the bird feeder, a favorite hangout for those "tree rats." First night netted no squirrels, but one medium sized raccoon. He or she was transported some miles away to an area with a nice creek.

The count has now risen to 5 raccoons and 1 squirrel. The squirrel went to our son-in-law who says he has none and wanted this one. Two more of the raccoons were adults and also transported to the same creek bank to begin a new life.

Last night husband set the trap up in the attic; and this morning inside were two babies. I did not go look at them, breaks my heart that they are separate from their mother (maybe). He said they were much more viscous than the older ones, hissing and very hard to get out of the cage. Raccoons make a sort of clicking sound, and as he was depositing the babies he heard that sound coming from the nearby weeds. I am going to believe that it is their mum and they will be reunited. Otherwise, these little ones were definitely big enough to live on their own.

The cage is reset and in the attic once again to see if there might be some more little 'uns up there as raccoons usually have litters a bit larger than two.

I haven't heard any noises from up top today, so hopefully they have all been captured. In the 42 years we have lived have never had this happen. Of course, more and more wild animals come nearer the house as they are losing their space to humans.

Now to figure out where they might have gotten in as there seems to be no access point. And, kudos to the husband for raccoon removal.
Collapse