Because our perspectives are fashioned from  who and what we observe,  and from those perspectives we create the process of living, I begin the telling of what I remember, that which I was told, and a few odd personal observations about the fabric of my life with my great grandmother. 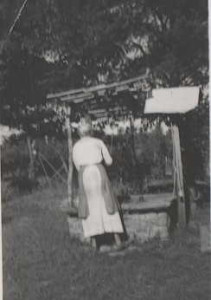 Sarah Butler Essex Daniels was born six years after the end of the American Civil War in a tiny house that clung to the side of a smallish mountain known locally as "The Knob."

On our annual trip to visit my mother's relatives in middle Tennessee we went to her house which was tucked away in what seemed to me to be an eternal forest with a long dark winding lane leading to the shotgun cabin in which she and her husband lived. She seemed as old as the hills that she looked as if she had been carved from. Slight in stature, hair pulled back into a bun, she walked with a cane and used a short stick to dip snuff from a small tin container. She drew her water from a well and it tasted like heaven. I remember interacting with her husband John, perhaps because he had a pet chicken? John sported a huge handlebar mustache, mostly white but stained with tobacco near his lips. I really liked John and the chicken. 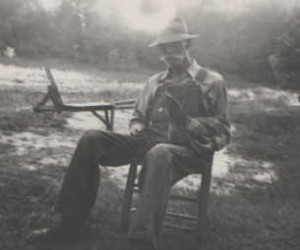 No one called my great grandmother Sarah. I didn't even know it was her name until I became interested in genealogy. She was called Butler by one and all including her daughter and granddaughter - my mother. She always wore her hair up. Her dresses were long and homemade, covered by aprons that were pinned at her waist. Her stockings were tan and thick rolled with garters to her knee. She was poor and uneducated, but kind, a genuine Appalachian Hillbilly.

She died when I was 13. I don't think I went to the funeral, but suppose my mother did. Just as I later discovered Butler had another name, I also found out that there was no father listed for my grandmother and no marriage documentation. I've always liked her more for her apparent indiscretion. After seeing my grandmother listed as Pasco Wassom in a census document, I pieced together my own version of what might have occurred. You see, the Wassoms lived right next door and their son, Charles was the same age as Sarah, sounds like opportunity was close at hand at least. And, their lifestyle in the mountains was by it's nature limiting, maybe they just didn't get to the preacher in time.

I cannot imagine how hard her life must have been thinking back on the circumstances I found so charming as a child, but she was tough and not a complainer. I wish I had known her better.

I am grateful to have known her at all.

When, sometime in the 70's, I took my own children there to witness all this awesomeness, there was a four lane highway about 300 yards beyond the cabin. I wept.