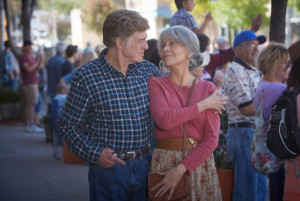 A few days ago I watched the movie made from Kent Haruf's movie, "Our Souls at Night." Haruf is a decent writer and I liked the book, though the ending was really unsatisfying, but they were his characters which gives him the right to do with them as he pleases.

Robert Redford and Jane Fonda are paired as a couple of neighbors about my own age, 70ish. In reality, both of them are 80 or older, but they have the benefit of makeup and who knows what in the way of plastics. In spite of all that Redford looked old and his movements as well as his dialogue were stiff. No way I would want to snuggle up to him at night. But, he was never at the top of my list for hot actors anyway. Sean Connery, sure. I'm a sucker for smarmy guys.

Fonda looked older than she does in the Netflix series, "Grace & Frankie". She's still rail thin and looks great in jeans though like most of us who are old has no butt. The jeans lose something when she is viewed from the back. Her acting is better than his, flows well and she slides into the character like a well worn glove.

The characters in the book were easier to engage with than the ones I saw on screen. But, that is usually the case for me, more a reader than a movie buff. As it turned out "Our Souls at Night" became background noise for the sweater I'm knitting. Couldn't get "into" it, maybe I didn't want to. I'm fond of neither growing old nor making sad choices.

I predict we'll see more of these geriatric love stories as writers and movie makers cater to the aging "Boomers". I hope some of them are better than "Our Souls at Night" was for me.
Collapse