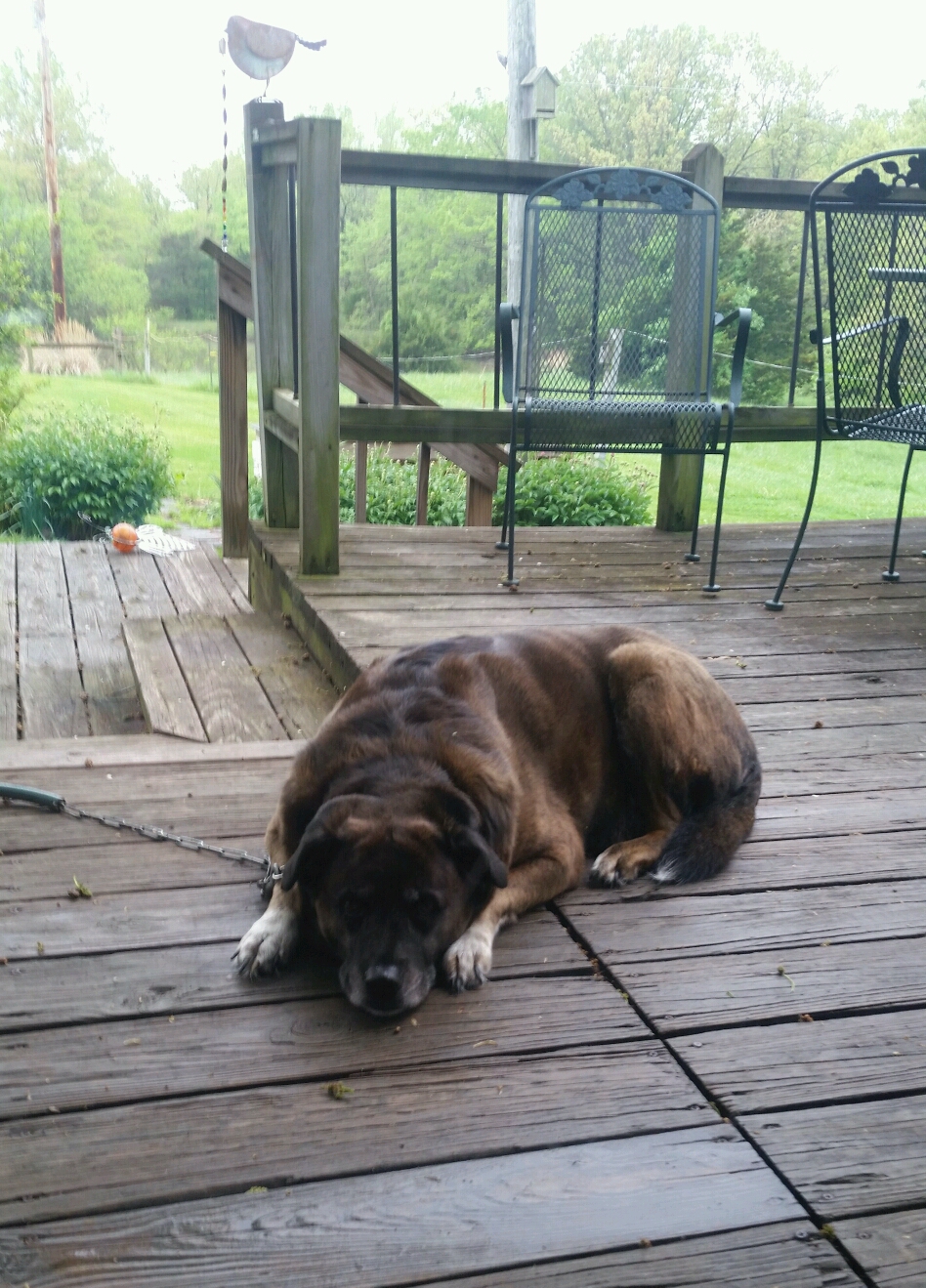 Rain, sweet rain, we got a nice amount last night. Tracy came home with Erin to help her get her shrubs and roses planted because they had upped the chances to 100%. Lately they've been putting rain the forecast and then withdrawing it, just a tease those weather people. I washed the car which must have been the right magic trick since the rain came. The plants are rejoicing, the seeds are wet with sky water. As I have no doubt said before you can water with the sprinkler endlessly but the plants really need/want the water from the sky.

And, Natty loves to lie in the rain.

Good news on daughter's tests, all but one were negative. They is still concern about her iron levels and GERD. Now she's on iron pills (I hope that they don't make her sick like they do me) and a stronger PPI. I really did not like even being in the doctor's office, but she needed me there. So much of modern medicine is based on $$ and less on compassion. It's a fishing expedition filled with test after test till they find something that fits into their diagnostic box. Though I was unhappy on the inside I put a smile on my face and behaved myself.

My brother's surgery, as I suspected it might, has turned into an ongoing nightmare. He has clashed with the doctor (who is admittedly a jerk) and he is an emotional wreck. Since he's not getting along with his doctor, he has no pain meds other NSAIDs and can't take Ibuprofen because he only has one kidney. He calls me everyday and I do my best to help him focus on something other than what's wrong. I'm really great with other people, but not so good at applying my advice to my own life. Another appointment looms tomorrow. Hope is that the doctor will not "fire" him as his patient, that he will at least talk to him. I am not going. This is not my circus and definitely not my monkey. Still he calls me every day to complain about his pain or to scream about the doctor. There were two days in there when I pissed him off by telling him I just wasn't up to listening to another tirade. He can be quite a jerk as well.

While I could be rejoicing at a lovely rainy day with nothing to do, I've instead been moping around feeling depressed, rejected, lonely blah blah... some days just too tired to do the "work" it takes to make me feel better. Read on FB (I am now thinking checking it even once a day is too much)...that a long time online friend's husband attempted suicide. PTSD. Nasty stuff. Years ago a shrink said that's what's wrong with my head. This guy is about my age. I think about offing myself, not a new thought, a very old one really. Reading about him scared me cause sometimes in the deep of night, past the midnight hour, I get those thoughts. The I'm a piece of shit, I wanna die thoughts. But do I want to hurt the people who love me by even trying it? NO NO NO.

Mopping the kitchen floor helped my mood and writing about it also makes me feel better. So, now the Russians know I'm crazy? Surely they already knew.

Going to find something else to do for a while, knit?