Looks like Erin's house will be completed in the next couple of weeks. I meet that deadline with mixed emotions. While it's been crowded and sometimes we've gotten a bit tetchy with each other, still, I'll miss them when they move. Silly me, I've gotten used to having them around.
Maybe this will be my last time wrestling with "empty nest."

And, hopefully, the timing will be right for the move and the reception of Anah's new puppy. He's going to be called Moose which will be apt for his size, part Black Lab and part Mastiff... BIG DOG. 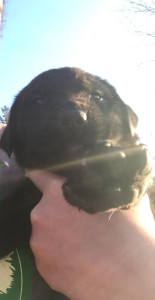 He's a rescue whose mom rejected him and has been bottle fed. Anah is over the moon and can't wait. Let's hope she holds up to the responsibilities and training a dog requires.

Yesterday was lunch at my house and we had quite a good time. Nikki had brought some applique blocks to work on and I got out my knitting. Lunch was divine. Tried a new recipe. Roasted brussels sprouts, roasted butternut squash drizzled with maple syrup and sprinkled with cinammon, all mixed up with dried cranberries and toasted pecans. We stood around the bar and ate with our fingers like savages of sorts which made it even more fun. The husband had brought home ribs and chicken from the local BBQ joint which made for easy finger food, and we topped it off with strawberries, blueberries,blackberries, and kiwis dipped in faux Devonshire cream. And, I got to put the plates away without washing them.

It's now officially spring because only moments ago I spotted the first of the buzzards that come every year to rest on the high line across the way. Never have they arrived so early, but I'm happy to see them. Love to watch the way they soar through the sky with such ease and seeming pleasure. Ah, that I could...but that's just dreaming.

Plus the crocus are coming up rapidly now. Still wishing and hopin' for some rain. Those poor little seeds we put in last week are just lying there wondering where the water is and waiting for it so they can sprout.

Talk about lazy. After breakfast I read for a while and took a much interrupted nap. Seems the phone always beeps when I'm trying to sleep, but I'm too neurotic to turn it off. So, I just endure.

And lucky me, on Sunday daughter #2 and I are going to The Elms for our annual short, but oh so cool spa trip.

Blessings all around, ain't it grand!

I did enjoy writing using various word prompts and had intended to keep using them to generate some creative writing. Yet, I didn't. Today I will. Using a random word generator that gave me these 8 words.

Maddy ran wildly across the bridge never looking back, stifling a scream with every step. The narrow bridge swayed though there was no wind and the small brown bag hung on her shoulder became unwieldy, slowing her progress. Her long red hair fell into her eyes and she mistepped, nearly slipping off the weathered bridge floor. From her addled brain now arose the thought that a small bribe might have gained her a ride from the old boatman up the road. But too late for that, the one remaining solid thought, the thought that drove her across the bridge, barefoot in the night, was to find safety from from he whom she knew still watched.

The ghost observed her every morning as she applied a thick layer of pancake and bedecked herself in gaudy jewelry before leaving her flat. One morning he was hypnotized by the ritualistic manner in which she layered cosmetics on her aging skin. If communication were possible between his realm and her he might tend to scold her and make her wash it all of, indecent really. Thus day after day he floated and watched until the day the phone rang as it did on rare occasions and thus the ghost did not consider that this day and this phone call would alter the routine they had established. She finished her makeup, tidied her wispy hair, put on her coat and walked out door in that oh so familiar way. She never returned in corporeal form, but one day the ghost noticed right in front of the mirror a vague outline of a well known form and the gaudiest ghost face he had ever seen. Soon after the apartment was cleaned out by some relatives and soon reoccupied by a group of Oxford students who were really quite interesting.
Collapse