Only about a month late in writing about this little trip. It was quick, left home on 27 July and returned home on 29 July. Enjoyed the trip up there, only about an hour and a half and we stopped several times to stretch, so I was pleasantly surprised to find that the discomfort of riding was minimal. Daughter #2, who had already taken me there earlier in the year, once again decided we needed a get away and I am grateful that we did. We laughed a lot on the trip up there. We take a little traveled two lane highway that has lots of memories embedded in it's miles.

Even though the temperatures were near 100 we managed to sit out by the pool for a couple of hours. As always enjoyed the spa facilities and had room service breakfast one morning. Total decadence, but very sweet. We even put on dresses and ate in the hotel restaurant one night. Great food. Rather than type about The Elms, I'll stick a link in here should anyone reading this want to know more about it. 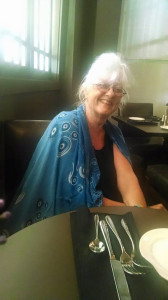 It was good to get away and do absolutely nothing. My back didn't hurt while I was there. And, I had a great facial. I am so blessed.

I appreciate my daughters.

I am grateful that I am loved.

Not much left in the garden now. Today Erin and pulled the last of the carrots and beets. The late zuchinni is setting on some fruit now and I hope it keeps heading in that direction. The kale got hit hard by cabbage moth larvae, so Joe sprayed it with some neem and hopefully that will kill the worms and it will come back. The green beans in the raised beds have produced nicely and I have put 5 quarts of beans in the freezer, more than I had expected. The cucumbers are having a cuke now and again and have climbed above the weeds now where I can see them. Tomatoes are sporadic, but nice enough when they show up. The San Marinos (similar to romas) are quite loaded if all goes well might be sauce in the future.

I made a tomato pie though it didn't turn out quite as I might have liked, still delicious but too much juice in the tomatoes made bottom crust soggy. It still got eaten :)

I can feel Autumn in the air now. Rain expected tomorrow tonight, some storms maybe and then a cool front with temps dropping. I don't mind that. Summer is not my favorite season though I do love the veggies.

I am ready to move on from this summer. I love Autumn.