Yesterday I was quite industrious, did some cleaning, cooked, ran the vacuum..and then in the afternoon I had a massage. While it felt good as it was being done, I sure did get stiff afterwards. Part of that was no doubt due to my being glued to the tv catching up on The Walking Dead, and it was cold in the living room too. Today still feeling sore and stiff and even somewhat out of sorts. Realizing that massage releases toxins and can sometimes make me feel punky, I am trying to accept that I may not be quite so industrious today. I do imagine that I can knit.

Also wanting to make an order for some KnitPicks Wool of the Andes Superwash as it's on sale right now and would be good for the donation hats. I've really used up a lot of my worsted weight stash, and I do so love getting a box of yarn delivered to my door. Can be quite exciting.

Cannot decided whether to ride the bike or not. It could be part of the lower back issues I'm having today...but I think I'll stick in a pic of the day I was on it just to remind myself that I am not sedentary yet. 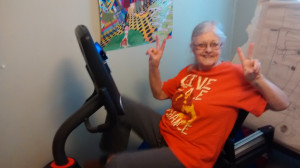 My granddaughter, Anah, is here with me now, having felt too crummy to go to school. She seems in pretty good shape to me, probably needed a break. I've never felt the occasional day off from school to be such a bad thing when the child is a straight A student. She is watching cartoons from her much younger childhood, so far we've seen Robin Hood, The Secret of Nihm and now one of my personal faves, Watership Down.

Almost finished with the donation box, added two today from a new pattern. 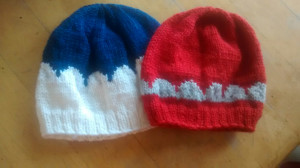 I'm pleased with the way the pattern worked out.

A rather gloomy.. misty, moisty day outside. Supposed to reach 50 so I expect much of the snow will be gone.

Husband bought a new crockpot. Haven't had one in years. Am trying something called Cheeseburger Soup for later today. Will report back on whether or not we like it. Only fresh ingredients, no cans of this or that and no Velveeta. First celery I've bought since the big plant I brought in last fall finally passed. I really miss her. Totally different from the pale stuff that reminds me of cellulose that is sold in stores. Will be planting some new ones this spring and hopefully can bring in another for next winter.

Have a great day... Spring is coming, I can smell it!
Collapse