Got a good report from the doctor, still waiting on bloodwork but expect that to be good as well.  Was happy not to have to wear a monitor or have a bunch of tests.  Had a EKG which was normal and after listening to my heart, he told me I should live to be a old woman.  Oh my, I thought I already was there ..lol Added a beta blocker to my bp meds and I'm waiting for that to take effect.  Still had palpitations today, though, of course wasn't having any when I was in his office.

Was tired all day, probably because I stayed up much later than usual but still woke up at the usual 4:30 a.m. Gave serious consideration to a nap, but was just nodding off when the phone rang and never got back to that. Watched two rather decent movies last night, "Dear White People", a satire on racial relations on a college campus and "The Good LIe" which is about the Lost Boys of Sudan.  I had watched a documentary on these boys a few years ago and am very moved by situation, their bravery, all they went through.. so poignant and so very sad, yet at the same time these boys/now men show amazing strength of character.

Today is my granddaughter, Lainey's, 11th birthday and she is celebrating with all her cousins at a skating rink in a nearby city.  I opted out of that party - no way this old woman is getting out on a skating rink though I did love to roller skate as a child.  Tomorrow she will be here and I am making as per her request a giant M & M cookie cake, so looking forward to all of that.

Amazing temperatures for this time of year.. slightly over 60 today which is a record.  Interestingly enough on this same date last year we set a record for low temps.

Finally conquered short rows in my latest knitting project and have another hat underway.  Thinking it's about time to get it all boxed off and sent to the reservations up North. Have a couple of new patterns I want to try first.  It's great to knit hats for little ones as tey go so fast and I am impatient.

Good to see the sun coming up earlier, no signs of Spring outside yet though sometimes the early crocus show up in February.

Playing with the Scrapbook Feature.  Apparently I used it last time I was on LJ but I ( imagine that ) have forgotten how it works. 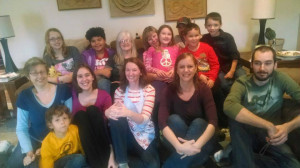